I've been working with the team at Energy Arts on various projects, but mainly in the capacity as a community coordinator. Currently, my focus is on helping them get a new community discussion forum off the ground, but I also had the chance to participate in the launch of their new Ba Gua Mastery Program.

The Ba Gua Mastery Program is a home-study program with information on circle-walking for meditation and martial arts. They've drawn from a live instructor training Bruce taught in 2009, and turned out CDs, DVDs, print manuals...the whole works! It's been a monumental effort and in the future I'll be discussing how we're going to blend live teaching with all these materials at BTC.

Right now though, I want to talk about their launch strategy.

Over the last few weeks, they've been building interest by sending out related content without trying to sell the program directly: 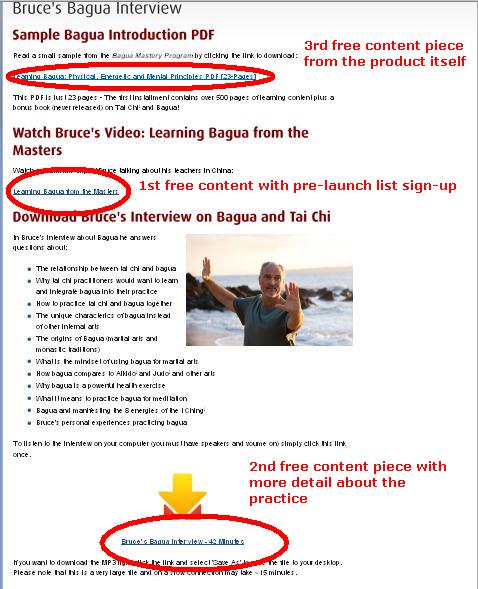 Here's a screen capture from one of the launch pages on their website.Â They've added to it as they released new content, so I've got back and highlighted what they put out in what order.

The first piece was a video of Bruce talking about his different Ba Gua teachers in China. On the video page, they included a "pre-launch notification" email list sign-up. In a follow-up email, they reported that over 2000 people opted-in to that list. Not bad, considering that all of the launch copy says they'll only be selling 250 copies of the program!

The second piece was an interview I conducted with Bruce and Richard Taubinger, who is overseeing the launch. We discussed more of the details of the practice itself and why people should be interested in ba gua as an art. I'm not sure about email sign-ups or interest in the interview.

Finally, in the most direct approach, they gave away some sample material from the product itself, just before the launch.

I'm not sure how long this page will be up for, but here is the launch page itself: http://www.energyarts.com/offer/bagua-mastery-program-launch

Overall, I really like how they gradually, but persistently built interest in the launch, drawing from a list they've spent considerable time growing and finally putting just enough urgency around buying (only 250 copies!) that they will hopefully convince the right people to act on it. We'll see!