For movement education professionals, understanding your marketing universe is so important. When I studied the history of astronomy and physics in college, it was fascinating to see how people had tried to better understand the natural world through conceptual models (by the way, the ancient Greeks knew the world was round because of the way their ships came into view on the horizon and Newton developed calculus to explain the motion of the planets). It seems like a fundamental human drive and the value is that it helps organize something that can seem chaotic. That's the value for you, trying to run a small business, too: turn marketing chaos into order.

Here are two models of my marketing universe. I'm not sure which one I like better, but I think they tell you different things.

First, the Funnel model (this is typical of what we see at Brookline Tai Chi): 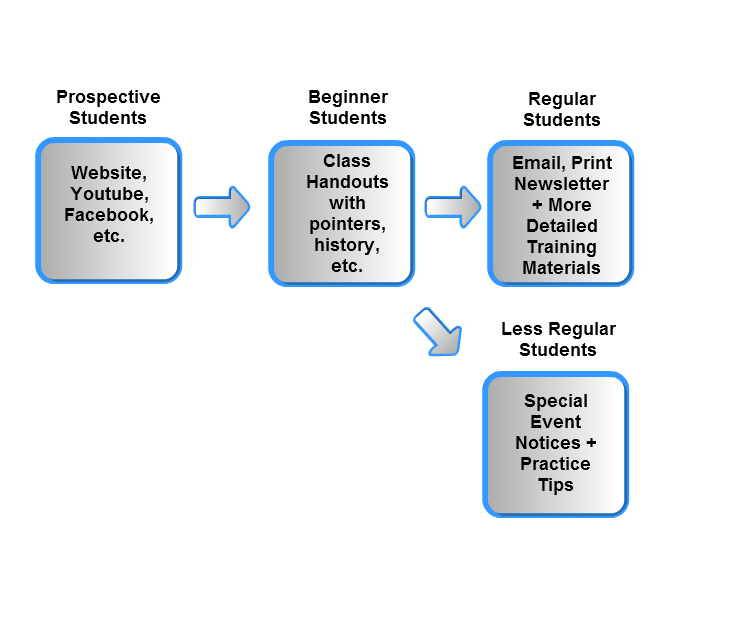 The value of the funnel model is that you can see how our students' needs change as they progress through the BTC curriculum. To me, the most fascinating branch is the post-intro split between "regulars" and "less regulars". "Less regulars" (as opposed to "Les Regulars"?) don't come to the school week-in and week-out, but as I've argued before, you still should think of them as part of the BTC universe. Here you see that you need to feed them different information to keep them an engaged part of that universe. Whenever we offer a slightly different workshop, for example, these folks come in from the far reaches of the universe to participate. They're just tuned in to a different radio frequency and we have to find the right signal to send out. Ok, you get the idea ;-)

Contrast the Funnel model to the Bull's-Eye: 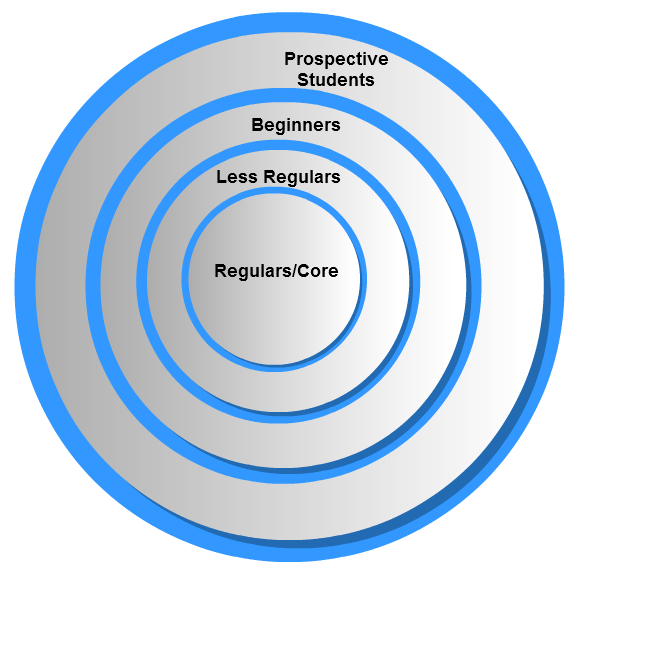 When I put numbers or names and faces to the Bull's-Eye, I get a feel for the "weight" of my universe. It feels heavier when the core is bigger, and lighter, harder to grasp, if most of the activity is out in the periphery. I'm always trying to set up our marketing to move toward the center of the Bull's-Eye, but it's fine if people live in different rings. Just understanding where they are at is useful, both in terms of the conversations I have with them and the marketing activities we aim at them.

By the way, do you think the Bull's-Eye looks more like a universe, an atom, or a cell?