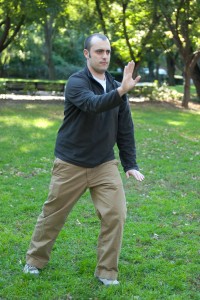 Recently, the question of "should I rotate my spine in Tai Chi" has come up frequently and led to a lot of confusion with some of our students.

We are told to maintain the "Four Points" - a sort of internal frame that runs between the shoulders and the hips, forming a box that keeps the spine from rotating or side bending while you practice Tai Chi.

Some people hear this rule and think, "but the spine has joints that rotate and bend in more than one plane" or "show me any athletic movement that doesn't make use of the rotational movement of the spine to generate power."

How do you reconcile these common sense observations with a principle that seems to limit natural movement?

Let's look at the developmental context in a few stages of learning Tai Chi.

Maintaining the Four Points for Beginners

First of all, you need to appreciate the context for each question and observation.

When you start learning Tai Chi, most people haven't spent a lot of time separating upper body and lower body movement or thinking about which one drives the other.

So, for beginners, holding the Four Points in place allows you to more easily steer the shoulders from the hips.

As you practice at this level, without rotating the spine, you train out all the upper-body-led exaggeration in your movements. You begin to learn how to feel the "power coming from the legs, being steered by the waist, and expressed in the hands," to paraphrase the Tai Chi Classics.

If you don't follow the rule of the Four Points at this level, you tend to retain upper body dominance, never finding proper folding in the hip joints and kwa.

Now, at a certain point, holding the Four Points as an external frame starts to limit your movement.

If you watch this video on the components of Roll Back, or Lu, you will see, especially around 3:30, the way that twisting and rotation enhances the subtly, connection, and power of your movements.

As you progress to interactive practices, the additional rotational power you can generate from micro movements in the spine will improve the quality of your response to an incoming force.

Compared to only turning from the hips, having the capacity to create rotation in the spine is like typing with all 26 letters, not just 14.

What the Rotators Miss

Now, you can see this in the above video to a degree, but I want to also point out one of the less obvious benefits of maintaining what looks like a more rigid frame.

You have to take into account the difference between bone and soft tissue.

One of the reasons we focus on maintaining bony alignments, beyond developing coordination and healthy movement patterns that don't wear on the joints, is finding separate movement in the fascia and muscles.

When you let the soft tissues turn around the bones, you begin to loosen them. If your bones and tissues are always turning together, you miss deeper internal loosening of these layers.

At this stage, a movement that looks very rigid and square may actually contain spirals throughout the soft tissues, but this is not obvious from the outside unless you've been trained to look for subtle signs.

When you make a rule like "never break the external frame of the Four Points," you don't account for someone's coordination, sensitivity, or body development.

There are several layers to the process of cultivating unified spiral-driven movement, but a simple rule like that doesn't account for very different needs at different stages of training.

Likewise, "always twist the spine" as a rule will keep you from developing certain sensitivity and connection and shouldn't be treated as an absolute outside of the right context either.

What do you think? How do you make sense of these kinds of rules and principles in your own practice? Has your sense of their meaning changed over time?